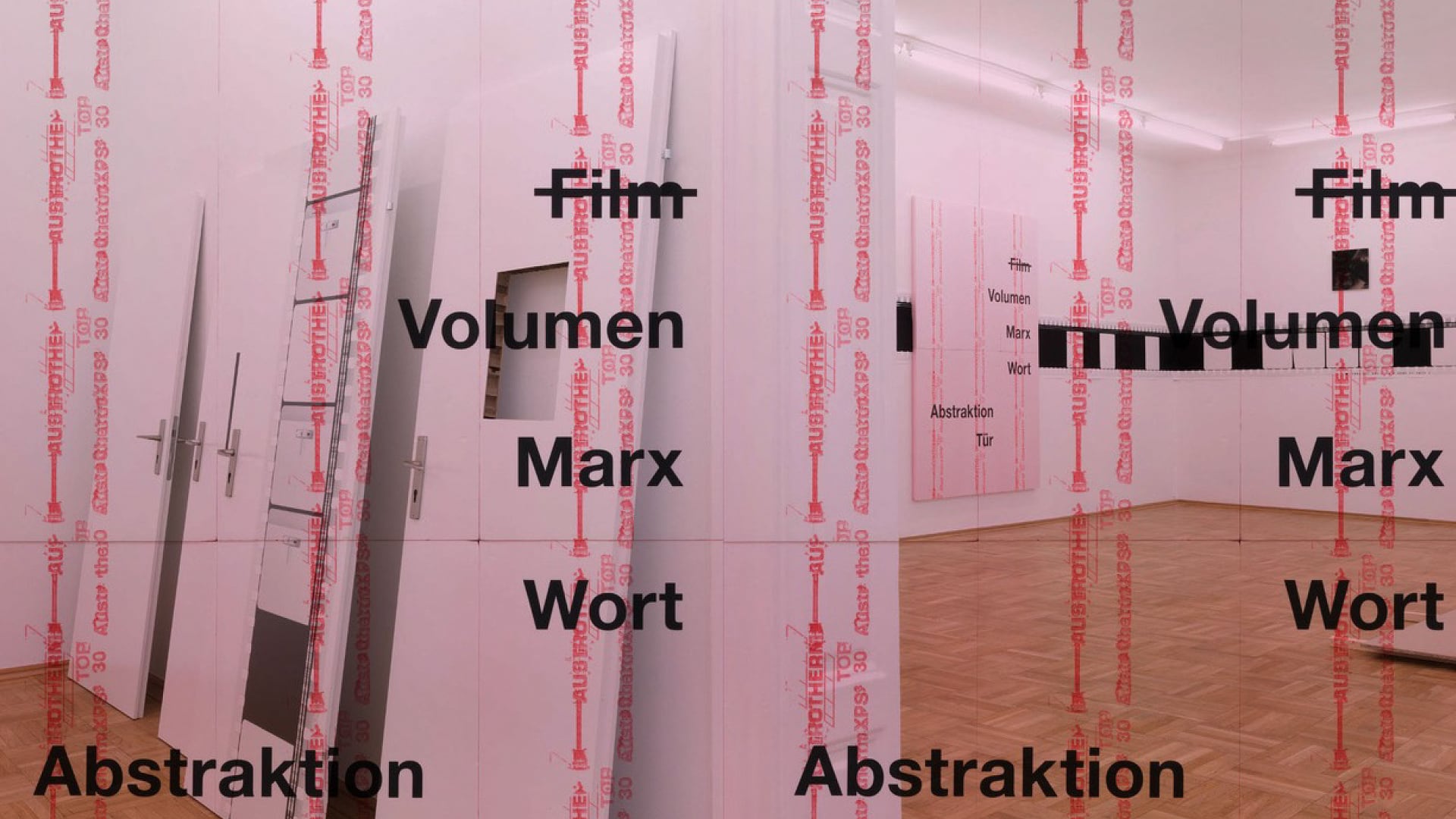 The exhibition The Digital Effect is dedicated to the question of how artists* deal with the effects of the digital on our mediatized present and social reality and how they reflect these effects in their working methods, strategies and aesthetics. In the works on show by the four artists Heinrich Dunst, Sophie Gogl, Hugh Scott-Douglas, and Philipp Timischl, the relationship to the tableau is processed against the background of digital conditions and thereby translated into other media.

Painting as space, the film strip as image and in between back to Marx: Heinrich Dunst’s criticism of the art system, inspired by the conceptual art of a Marcel Broodthaers, is revived through an analysis of word and image to the medium of film, whose materiality and editing procedures he appropriates through the means of digital reproducibility.
In his new installative work for the exhibition at the Neuer Kunstverein in Vienna, Dunst displays in a sequence of prints the processuality of his practice, which at present can no longer be thought of without the rapid transmission and dissemination processes of the digital. The work shown, Projektion, is both a documentation and paraphrasing of a previous exhibition in 2019, A. B. a. P. — Antonio Banderas as Picasso, at Galerie nächst St. Stephan. On the one hand, the photographs of the exhibition installation form the basis for the digitally mounted views of the exhibition’s analogue double on analogue paper supports. On the other hand, the exhibition views are also part of the Internet as an archive of images that make it possible to view and enter these equally doubling (museum) exhibition spaces internationally, thereby generating an aura of art on their own. As fragmented sections of documentary photographs that have been edited, reconstructed and printed out, the artist understands his work as a critical reflection on the contemporary situation of art generated by the digital omnipresent. At the same time, it is a prerequisite for the fact that the documentation of the artistic process itself can be the work of art (Boris Groys, In the Flow, 2016).

Philipp Timischl’s pictures combine free associations from found text fragments, film, music, advertising and his everyday life, which he transforms into his own poetry and condenses with digital or analogue photographs, his snapshots and paintings to create diary-like collages on canvas. By altering perspectives between near and far and taking pictures of the same subject at different times, he not only refers to the temporal and spatial difference as the basis of narration, he also invites the viewer to tell his*her own personal story to him*herself. In his works, the artist combines set pieces of social reality and representation into a critical discourse on the relationship between truth and fiction, original and fake, analog and digital world and reality and language. In the work Truth and Truth, 2020, for example, he takes the term itself ad absurdum by doubling a
slogan, whose letters he incorporates into the canvas in a combination of the most diverse ‘real’ materials and their ‘false’ imitation. The works shown in the NKW can also be read in the context of a larger planned multimedia sculpture that combines the media of painting and video and whose installative juxtaposition Timischl has been working on for several years. In his new paintings he also plays with ironic undertones. The seemingly naive slogans in combination with the use of wallpaper background, white pearls and cheap crystals are juxtaposed with pictures of specifically political content and ambiguous references. Timischl counters the duality between serious sociopolitical themes and art as an intellectual luxury good with an exaggeration of obvious clichés and a great deal of humour. Timischl’s work impressively demonstrates how topical the medium of
painting can be by addressing class differences, national boundaries and privileges, but also the contemporary language and signs associated with them.

Hugh Scott-Douglas works with multi-layered imaging processes that combine old and new technologies, such as natural exposure and forms generated by algorithms, which he then transfers to canvas or translates into sequentially arranged image series. The newly produced cyanotype prints are based on drawings by Günther Domenig & Eilfried Huth for the Floraskin project, a hotel complex in Morocco designed in 1971 by artists, architects, sociologists, psychologists, and cyberneticists as an alternative to mass tourism. Adapted as a script of an unrealized project from a pattern-cutting machine, they show new structures that form an unlimitedly expandable system of technological megastructures and the principle of natural growth. A second filmic work entitled over the paving stones, under the paving stones, the beach is a projection with 60 slides based on found footage from a cinema that was closed down in 2006. The artist has reversed the title phrase from the famous graffiti of the ’68 students’ protests in France and collaged it into the edited archive material of the found 35 mm trailer as fragmented text. The result is a projection that is permeated by language.

Sophie Gogl’s artistic practice shows interest in the mechanisms that lead to pictorial motifs emerging and spreading out of the all-encompassing flood of data. From an expanded concept of painting, she understands the picture as a body. Intuitively, she takes up references that describe her subjective, emotional state of mind in the face of the present determined by digital media and visually expresses her own reading of reality, which is determined by an ‘ambivalent constitution’. Restlessness, rage, euphoria or fear of loss, or the fear of losing oneself, are emotions that give the artist creative impulses and whose value she emphasizes in order to remain alive. She works with photographic templates, scans, and montages and is inspired by the Internet: What in its beginnings offered refuge as an ‘artistic space for nerds’ has now become a ‘lucrative machine’ and a space that can be exploited artistically in return. Gogl draws motifs and themes from this and counters the fluid placelessness of digital space and its marketing logic with an increased objecthood and corporeality as well as her personal interpretation. The three works shown are extensions of her last exhibition in the Galerie der Stadt Schwaz. With the illusion of burnt paper on canvas, the artist plays with the content-related demands on painting, just as the lines of a college block transferred to wood as a medium of writing, quick note or personal reminder refer to creative techniques. Lyrical lines of text as the subject of her works leave it open whether they originate from one or different sources. The light-looking motifs contrast with a certain heaviness of the material of wooden panels and stretcher bars. The colour of recycled paper is an ironic reference to the impossibility of producing ‘’ethical’ images in an ecological sense and the moral self-elevation through the use of environmentally friendly material. The artist negotiates the tableau as a carrier of content, but at the same time refers to the mobile panel painting, which makes the medium of painting transportable and marketable.

The works by the four artists presented in the exhibition "Digital Effect" were reworked and transformed for Parallel Vienna 2020. The new constellation of the artists' works included video works by Hugh-Scott Douglas and a spatial intervention by Heinrich Dunst. The wall of the exhibition area, which is now almost completely covered, creates a wallpaper-like interlocking of the paintings by Sophie Gogl and Philipp Timisch, literally turning the theme of painting into a question of space. 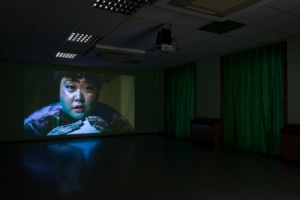