Whose Sleeves Have Brushed Past?

Whose Sleeves Have Brushed Past?

21 November 18:00, Artist Talk in a frame of Vienna Art Week with the curator Felicitas Thun-Hohenstein

The exhibition of the artist Sofie Thorsen ‘Whose Sleeves Have Brushed Past?’ relates the work ‘Tokyo March’ (2009) with more recent sculptural works by the artist. While ‘Tokyo March’ has its starting point in the diagrammatic drawing of the facades of the Ginza shopping street in Tokyo in 1931, the installation ‘Whose Sleeves?’ deals with Japanese screens from the 18th century and their representations of ancient kimonos.

Thorsen is less concerned with the concrete models than with investigating the surfaces, ornaments, and patterns in relation to the lack of physicality of the 2-dimensional representations of architecture and garments.
In an experimental arrangement, the artist has created a sphere in which two slide projectors, as protagonists engaged with and against one another, push forward the focus, drawing as the essence of the photographs with their projections and turn the quote into an event.

In contrast to this attempt to enter into the drawing and thus into the historical ginza by means of the camera, the objects in the installation ‘Whose Sleeves?’ have been extracted from their original two-dimensional state and the forms of the kimonos depicted have become independent paper sculptures wrapped around poles spread throughout the room.

The depicted kimonos thus acquire a fragile, despite their three-dimensionality, paper-like physicality. The original forms and patterns are no longer legible and only exist as contours and colors. 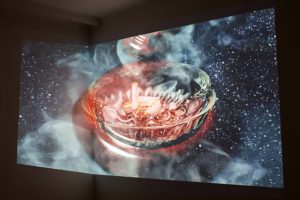