The first exhibition this year is dedicated to the New Zealand artist Sriwhana Spong. Spong's artistic practice draws on elements of modern abstraction and, by developing her personal body language, transfers them to areas of dance and mythology. With complex, cinematic and real installations based on video works and Super8 projections as well as with enigmatic sculptures and collages, in which she interweaves fragments of popular culture of the 1970s with ritual, reality, and myth, Spong attempts to trace the way in which stories are created and told.

Her central video and film works ‘Lethe – wards’ and ‘Costume for Mourner’ as well as collages will be presented in the exhibition in Vienna. ‘Costume for Mourner’ reconstructs the dance chorus from the ballet ‘Le Chant du Rossignol,’ based on Hans Christian Andersen's Fairy tale ‘The Nightingale,’ which was developed by Igor Stravinsky and Gorge Balanchine for Dyagilev's ballet Russes. The story of the nightingale tells the tale of a Chinese emperor who exchanged his nightingale for a mechanical bird, which, however, soon became defective. With the return of the living nightingale, the emperor not only recovers from a serious illness, but he also learns about the world outside his palace and court life through the wonderful song of the little bird. Spong addresses a touching story about man and nature, life and technology, the mortal and the eternal.

There are no original recordings of ‘Le Chant du Rossignol’ from 1925 because Dyagilev was of the opinion that the film technology of the time was not able to reproduce the movements of his dancers sufficiently. The only remaining documentation of the ballet are a few photos of the dancers and the costumes specifically developed by Henri Matisse for the ballet. ‘Costume for Mourner,’ presented and choreographed by Benny Ord, becomes, on the one hand, a dreamy dance about what has been lost and on the other a contemporary and personal artistic synthesis between body, costume, image, and movement.

‘Lethe-wards’ shows the main characters of the ballet ‘Le Chant du Rossignol’ in a double projection. With the title ‘Lethe-wards,’ Spong refers to the name of one of the underworld rivers in Greek mythology, Lethe, whose waters make anyone who drinks from it forget their memories. Spong addresses this loss by developing a dance between the emperor and his nightingale from the few remaining memory fragments. ‘Lethe-wards’ comprises two films — the first color film shows the emperor's dance in digital version and the second, shot in black and white on 35 mm film, presents the dancing nightingale.

The collages by Sriwhana Spong also deal with moments of dynamism and movement and their spatial and temporal dimensions and combine these into geometric figures and forms. About the interaction between geometry and the organic structure of the dancers' bodies, Spong says: ‘There are no full stops to the body, just lines that go on.’

The collages relate to the films by being of Balanchine and or his choreographies. They are explorations of images and their dispersion, in addition to the experienced event and how it is represented. “In my research for the two films, I kept coming across duplicates of images in different books- where each image would be slightly different depending on paper stock, size, print ink, etc. I enjoyed the instability that these shifts created. Other collages are different viewpoints of the same dance — so there is a sense of a shifting and roving viewpoint. The triangle shape that I cut out to reveal one image behind the other is based on the chevrons of the Matisse costume used in Costume for a Mourner." Spong's artistic works combine art, dance, narration, movement, space, time, and image. They are based on research and analogies, which through historical and cultural distance, through personal memory work, carry off the intellectual and physical transformation into a beguiling and mysterious world.

Sriwhana Spong was born in Auckland, New Zealand in 1979. Since graduating from the Elam School of Fine Arts University Auckland in 2001, her work has been shown in solo and group exhibitions in Australasia, the USA, and Europe. 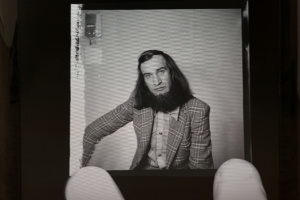