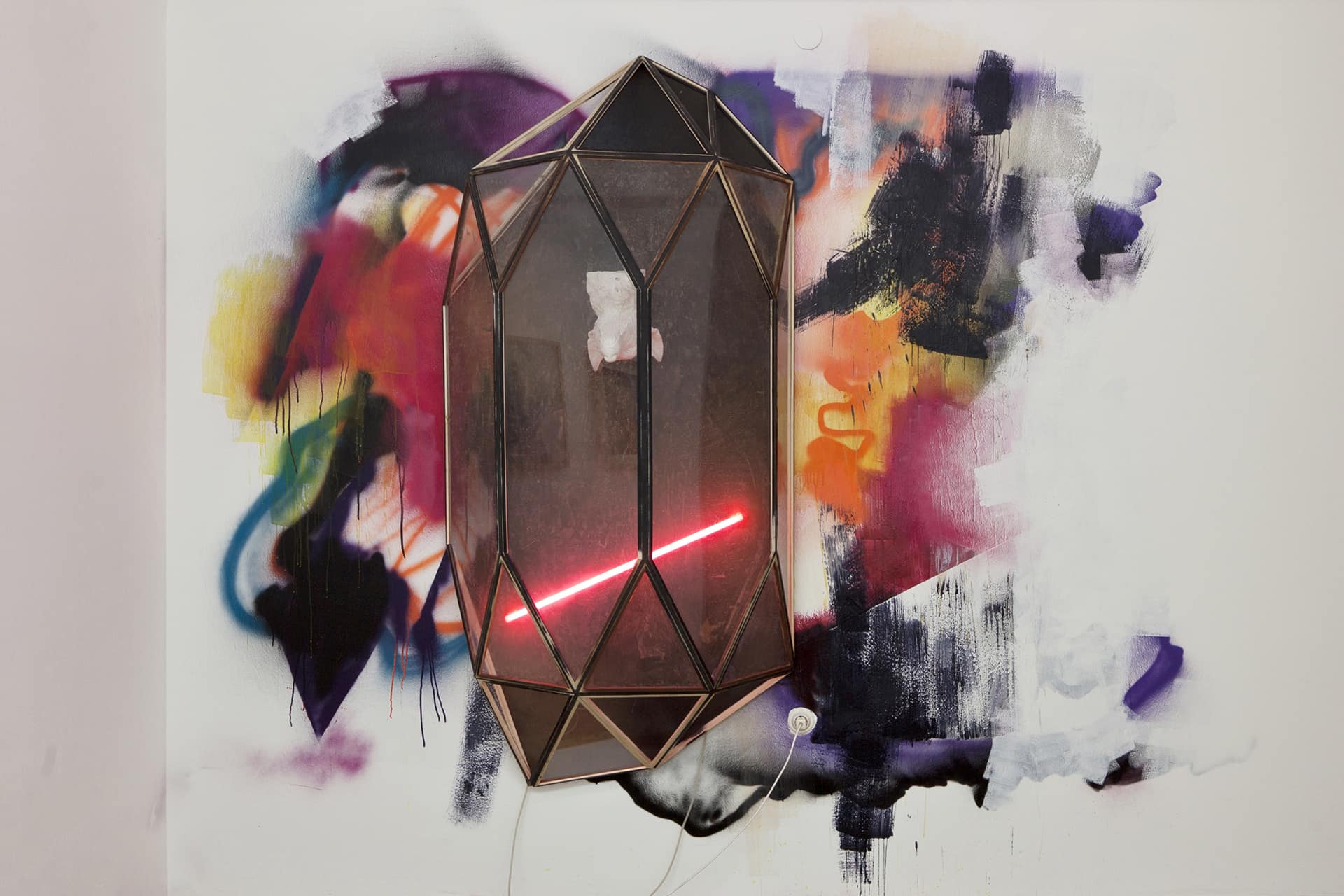 The Neuer Kunstverein Wien is showing an exhibition that focuses on the dialogue between the artistic positions of Tanja Roscic and Loredana Sperini. The focus of the project are works by the two artists, which are shaped by strategies of decomposition, appropriation, and recycling.

The works of the Croatian-Albanian artist Tanja Roscic, who lives in Zurich, show mystical-surreal worlds that revolve around creation, metamorphosis, and transience. Her works possess an aesthetics and materiality charged with aspects of glamor, occultism, and protest culture, all the while remaining enigmatic and detached. Tanja Roscic is particularly interested in the symbolism of human representation, which is expressed in depictions of predominantly young women whose portraits are painted over and fragmented.

These auratic beings presented in her paper works, which are sometimes composed of media templates and abstract streaks of color, reveal their qualities on the one hand through their noticeable haptics, but also through their introverted emotionality. With her sculptures, she turns to a game of masks and doll-like configurations. In her installation productions, Roscic repeatedly questions the common strategies of constructing the subject and the collective self. She works across borders: videos, room installations, drawings, texts, music, or performances as evidence of a self-related and personal way of working.

In the exhibition at Neuer Kunstverein Wien, drawings, collages, and a sculptural work Tanja Roscic developed with Loredana Sperini especially for the space in Vienna, is presented. Loredana Sperini lives and works in Zurich and became known for her relief-like hand embroideries and drawings of auratic female figures as well as the slow layering process between wax and (wall) paintings. Sperini is showing a new series of small sculptures made from found porcelain fragments. Her sculptures testify to times gone by and condense small scenes into existential messages of a fragile present. She is interested in the ‘imprints of the human’, the transfer of corporeality into works of art. Beyond that, Sperini also analyses their art-historical, socio-political, and poetic reception. Body parts and abstract constructions of her porcelain sculptures, remnants of the 2nd world war found in Berlin, form the starting point for a balancing act between familiarity and foreignness, spiritualization and destruction, freedom and imprisonment, beauty and horror.

In addition to Loredana Sperini's sculptural works, her new wax paintings, in which she slowly applies wax and paint in many layers on concrete, will also be on view.