This exhibition, showing works by Anna Artaker and Meike S. Gleim, is dedicated to social transformations, ruptures, and phenomena that — corresponding to Walter Benjamin's chapters in Passagenwerk — are related to the technical development, the spreading of mirrors and lighting.

Today, artificial light and the proliferation of images often coincide: images are broadcast and the screen itself emits light (computer screen, TV screen, smartphone display...), advertising surfaces are illuminated at night or are themselves sources of light. The mirror, in turn, is replaced by the digital reproduction of our environment: photo and video cameras in cell phones or in public spaces to monitor the same are omnipresent and simultaneously reflect the visible world like a mirror.

Illumination and mirror thus grow together as two sides of the digital and virtual world, confronting us with an inexhaustible flood of images. We counter this flood of images with addiction, distraction, fatigue, and neurosis. The montage of images that spreads across the two window fronts of the Neuer Kunstverein Wien explores this development of the last decades by stopping the digital flood of images — the images are not presented digitally but analogously — and freezing time: a bench in front of the window front casts a shadow that lies in space as an unchanging object. In this way, the exhibition invites us to pause and contemplate the developments that can be read as an extension of the effects of lighting and reflection.

The images that reflect these technical and social developments are arranged in such a way to mimetic and dialectical entanglements, tensions, and moods become visible. In the process, common systems of order are disturbed, and connections are made between things that are otherwise considered foreign in nature.

The exhibition title ICH HABE NICHTS ZU SAGEN. NUR ZU ZEIGEN. ('I have nothing to say. Only to show') is a quotation from Walter Benjamin that characterizes his method in the Passagenwerk (W. Benjamin, GS, Vol. V1, p. 574). The same gesture is relevant for ATLAS VON ARKADIEN, the attempt by Anna Artaker and Meike S. Gleim to subject the Passagenwerk to a twofold translation.

The first translation is seen through the transfer of the motifs, which Benjamin analyses on the basis of the technical developments of the 19th century, into the late 20th century. The second is achieved by taking Benjamin's statement that he had ‘only [something] to show’ seriously insofar as Artaker and Gleim collect and assemble images instead of quotations and textual excerpts as Benjamin does.

Anna Artaker
Born 1976 in Vienna. Lives and works in Vienna

Artaker and Gleim's artistic research project entitled ATLAS VON ARKADIEN at the Institute for Art and Cultural Studies at the Academy of Fine Arts Vienna is supported by the FWF within the framework of the Program for the Development and Exploitation of the Arts (PEEK).
See also: anthropologicalmaterialism.hypotheses.org/ 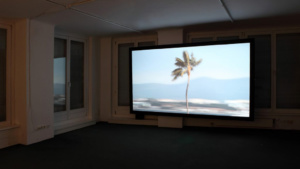