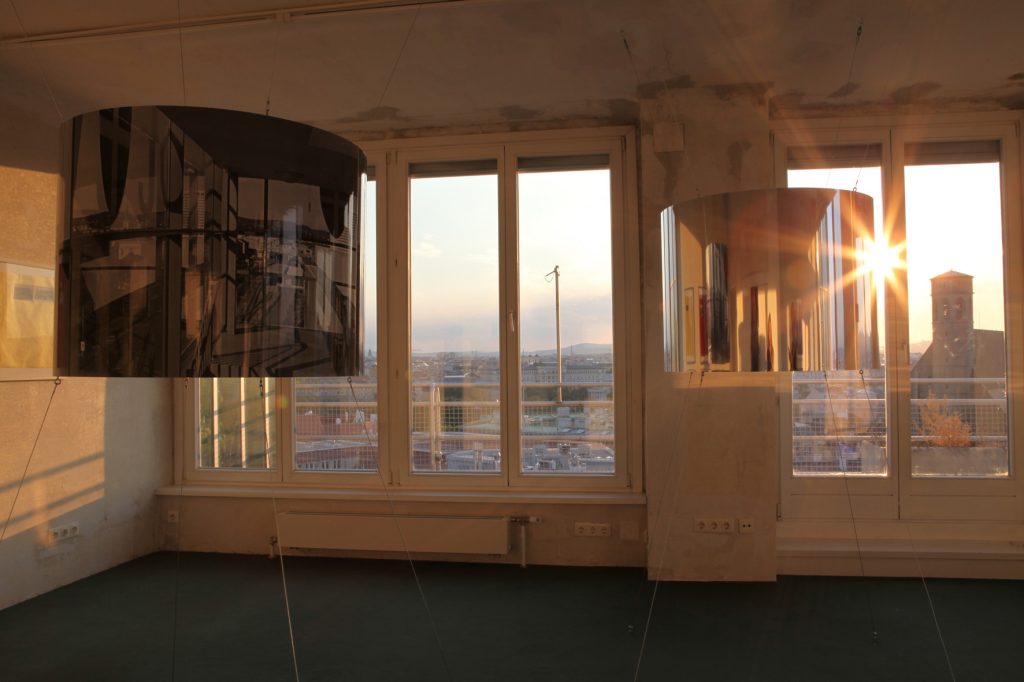 After leaving the premises at Bauernmarkt 9, Neuer Kunstverein Wien is back with the upcoming exhibition ‘180°’ with Mladen Bizumic and Andreas Fogarasi at Hochhaus, Herrengasse 6-8, 1010 Vienna. The two artists work with the building, that of the skyscraper, a modernist feature of 1930’s Vienna, a building that represented New York lifestyle and feeling in Vienna.

In his spatial interventions, objects, typographic investigations, and video works, Andreas Fogarasi deals with the image-making of cultural places and objects. With which "image" does a place, a city, a brand, or a landscape try to reach the reader or the consumer? The exhibition ‘180°’ also deals with the development and changes of urban spaces, their conditions of perception, and the associated transformation processes of urban life, with the relationship between image, memory, history, and archive.

In the exhibition, Fogarasi shows his installation 'Public Brands - Amtshaus der Stadt Wien,' 2004; a cylinder, on whose photographic foil an official building of the city of Vienna can be seen, through whose window and logo a city panorama has been placed. Next to it, Fogarasi places a new work, in which the distorted image of the surroundings is mirrored with the view of the exhibition space. Both works are placed in front of the Vienna panorama on view. He contrasts the elegance and coolness of this spatial installation suspended on a thin wire, which plays with the glossy aesthetics of commercial image brochures, with the rawness of the walls of the exhibition space, which in turn reveal the construction material of the building. In addition, Andreas Fogarasi installs a postcard holder that virtually floats in space, which he provides with a marble piece in the format of a mailbox. The postcard is the working basis for the installation developed especially for this project as well as for collages by Mladen Bizumic.

Mladen Bizumic uses different media for his works, be it installations, projections, or sculptural works. In the exhibition in the Hochhaus Herrengasse, he refers to factors that are important for him, such as the exhibition venue, its architecture and history, the exhibition environment, its conditions, and duration. For him it is always crucial, to have an effective interaction between the work and the exhibition, its content, and context. For his collages, Bizumic often uses material that has already had another function, such as book illustrations, architecture portfolios, or as in this case, old postcards with the image of the skyscraper that have long been sent.

Mladen Bizumic reflects on the architecture and history of the skyscraper by placing the old postcards he collected from 1930-1950 on large, glazed tableaux. The works, designed in the modernist colors of red, yellow and blue, reflect the exhibition space in the building and the impressive view of Vienna. Mladen Bizumic addresses the relationship between time and space by allowing the historical views, the history of the building to return to their real place, as it were.

The phenomenal view of the exhibition space, located on the 13th floor, corresponds with the beautiful views of the postcards. The expansion of the exhibition space through the agglomeration of views and vistas is underlined by Bizumic through an invisible projection, in which he projects the views onto the window surfaces and makes them disappear into the vastness.

The exhibition ‘180°’ is a meeting of two artistic practices with different approaches but the same concern to deal artistically with the temporal and spatial dimensions of a place. This duality takes place in the exhibition space, which is divided into two halves — the panoramic windows and the walls.

The three layers of wallpaper originally applied were removed at the artists' request to reveal a piece of the building's history, which can be read in the holes, plaster and paint remnants, pieces of wood, and building material. For the exhibition opening, Robert Temel was invited by the two artists to give a short lecture on the subject of ‘Attic conversions in Vienna.’ 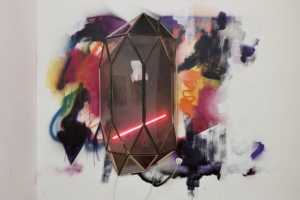